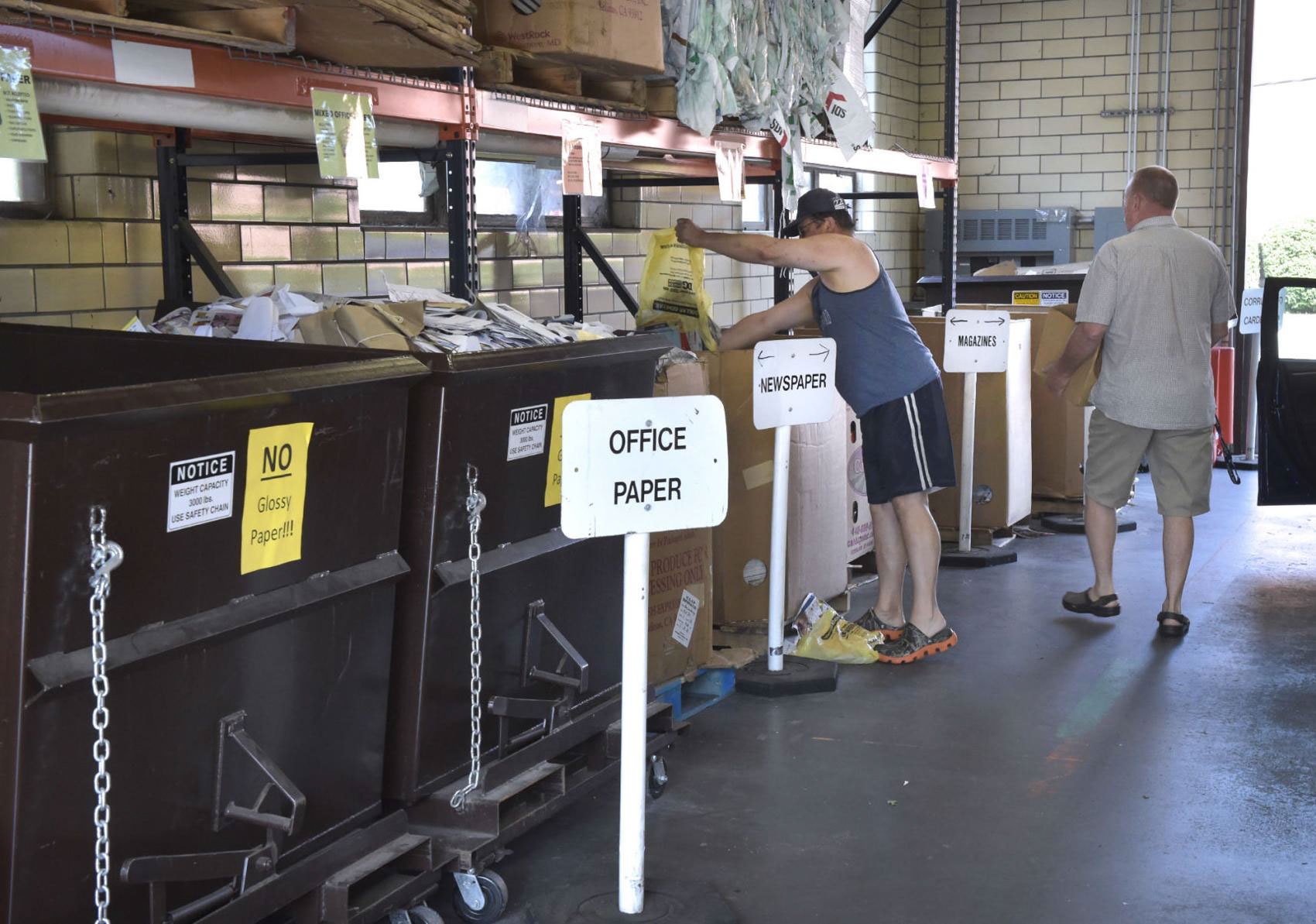 Three weeks after Lancaster County waste officials announced they were scaling back curbside recycling, many residents are still putting banned items in their bins.

"We have a huge hurdle in front of us," said Katie Sandoe of the Lancaster County Solid Waste Management Authority. "People are still confused and working through the emotions of it. Many are saying, 'It just feels wrong.' "

About 20 to 40 percent of the material being set out in curbside recycling containers should instead be placed in the trash, according to Sandoe.

The newly banned items include newspaper, magazines and many types of plastics, among other things.

Lancaster County was one of the first areas in Pennsylvania to react to a market collapse of recycling materials in the United States.

Here is a breakdown of some of the questions and concerns of county residents as they react to the recycling reset.

Why do we have to stop curbside recycling of newly banned items?

The recycling logjam was brought on by an unforeseen decision by China to stop taking many recyclables altogether and insist on uncontaminated material for others.

A rapidly developing China had been gobbling up half the world's recycled paper and plastic. Now that it's using many of its own resources, it doesn't need the material, and the unwanted trash mixed in with recyclables from the U.S. has created a waste disposal problem.

Faced with no market or uncertain markets for some materials, the Lancaster County waste authority chose to cut out some recycling staples that residents had long thrown in their green recycling bins and hauled to the curb each week.

Instead, accepted recyclables have been trimmed to the "Big Four": flattened corrugated cardboard, plastic bottles and jugs with necks, metal food and beverage cans, and glass jars and bottles. All containers must be empty, rinsed and caps removed.

Isn't this a step backward for recycling in Lancaster County?

The authority says materials now being recycled have long been in strong demand for making new products and are likely to have a strong market in the future.

The transition has been tough on avid recyclers who have long been mixing in nonrecyclable items in a behavior known as "wishful recycling," said Sandoe.

"This is what led to the whole issue with China to begin with," she said. "People aren't sure what is truly recyclable so they are putting everything into their recycling bins."

Also, curbside recycling only amounts to 14 percent of the 255,000 tons of recyclables collected in Lancaster County last year.

Recycling from businesses and institutions is largely unaffected, as they sell their material directly to recycling processors. The main problem has arisen in the processing phase of recyclables from areas where curbside collection has introduced contaminated items.

Can some items banned from curbside recycling bins still be recycled somewhere?

Yes. The authority urges residents to separate items such as newspapers, office paper, Styrofoam and other material and take it to recycling drop-off centers around the county.

For example, Lancaster city's recycling center at 850 New Holland Ave. accepts newspapers, magazines and office paper. It is open from 8 a.m. to 5 p.m. Monday through Friday and 8 a.m. to noon on Saturdays.

"I'm hoping we have a big uptick because I'd much rather see it brought to the recycling center than it be dumped into trash, even though I know it would be made into electricity," said Charlotte Katzenmoyer, the city's public works director. She said the city still has buyers for the material, even though revenue for it has declined. She said city workers do a good job of processing the material and removing items that would contaminate it.

Another place that accepts newspapers, magazines and office paper from the public on a drop-off basis is Mennonite Central Committee's Material Resources Center at 517 W. Trout Run Road, Ephrata.

The website Earth911.com has a database where you can plug in your address and item you want to recycle to find the nearest outlets. LNP has found, however, that some of the places listed are no longer in operation.

Won't items no longer being recycled just be taken to the county landfill and fill it up sooner?

No, Sandoe said. Unlike most communities in the United States, where materials no longer recycled are being taken to landfills, in Lancaster County the material is taken to the trash-to-energy incinerator and converted into electricity.

The increase in incinerator ash taken to the landfill will be minimal, she said.

The waste-to-energy facility incinerator has an extensive emissions control system and emissions are significantly under limits set by state and federal agencies, Sandoe said.

Why does Penn Waste still collect newspaper and plastics banned in Lancaster County?

Penn Waste is the contracted hauler of curbside recyclables and trash for Lancaster city, and Lancaster, West Lampeter, Mount Joy and Rapho townships.